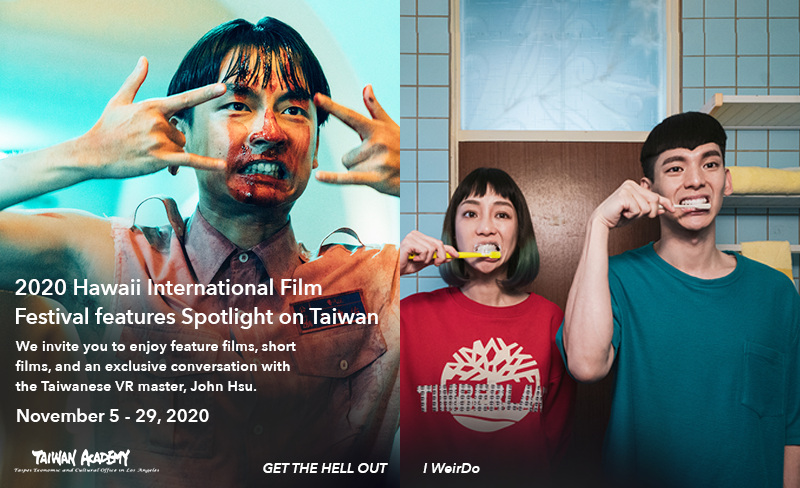 With the support from Taiwan’s Ministry of Culture, Taiwan Academy in Los Angeles has launched “Spotlight on Taiwan” at the Hawaii International Film Festival (HIFF) for ten consecutive years. This year, “Spotlight on Taiwan” will kick off online via HIFF’s streaming platform from November 5th to 29th, showcasing 2 feature films “Detention” and “Get the Hell Out,” and 2 short films “Growing Pains” and “See You, Sir” in “Shorts Program: Turning Point,” as well as a conversation with the Taiwanese VR master, John Hsu. All the above online contents will be available to watch through the entire United States. In addition to online screenings, two feature films “I WeirDo” and “A Leg” will be presented as live screenings at the Consolidated Theatres, reflecting Taiwan as an international front leader in pandemic prevention, and its robust and growing creative contents.

Being the first Asian feature film shot entirely on an iPhone, the fantastical and realistic film “I WeirDo” depicts the story between two lovers who both suffer from obsessive compulsive disorder (OCD). It was selected by the Udine Far East Film Festival in Italy, the Fantasia International Film Festival in Canada, and has won the NETPAC award at South Korea's Bucheon International Fantastic Film Festival. “A Leg”, being selected by the 2020 Golden Horse Film Festival as the opening film, is about a husband and wife who met each other while ballroom dancing, and the wife has to fight hospital bureaucracy to keep the body intact when the husband dies during a leg amputation. “Detention,” adapted from a video game, is a horror-thriller about the darkest moments on campus in the history of Taiwan, which has won five awards from the 2019 Golden Horse Awards including the best new director and the best adapted screenplay. “Get The Hell Out” is a zombie movie that satirizes politics. “See You, Sir” explores young inmates’ plight in the juvenile detention house. “Growing Pain” deliberately portrays a father through a young man’s lense.”

Another highlight at “Spotlight on Taiwan” is the VR spotlight conversation with John Hsu, the Taiwanese transmedia filmmaker who directed the VR short “Your Spiritual Temple Sucks” in 2017 that was selected by the Sundance Film Festival. His feature film debut, “Detention,” also became a box-office hit. His latest VR work, “Great Hoax: The Moon Landing” has been shortlisted for the competition session of Venice VR Expanded at the Venice Film Festival this year. The VR spotlight conversation will chat with Hsu about his innovative work across many mediums and explore the new work flows that are happening in today’s filmmaking by Taiwan’s innovation in VR/XR technology and the new ways of storytelling. Two Hsu’s VR works, “Your Spiritual Temple Sucks” and “Great Hoax: The Moon Landing,” will be featured in HIFF XR Showcase. The conversation will be available on November 13th, free of charge. Welcome to register online.

In its 40th edition, 2020 HIFF will present over 200 films from 45 countries through November 5th to 29th. Featuring world premiere screenings, panel discussions, industry events, and virtual reality exhibitions, HIFF acts as the only statewide independent film festival in the United States. It has been regarded as the gateway for Asian film into the American market and the world’s foremost festival that bridges the Eastern and Western culture.